In physics class, we had a project to write an article about any female scientist. My article is about Esther Lederberg. 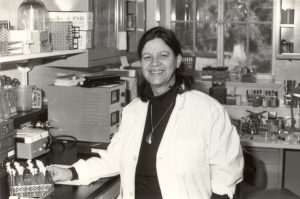 Esther Lederberg born on December 18, 1922, The Bronx, New York City, United States. She was an American microbiologist and a pioneer of bacterial genetics. Notable contributions include the discovery of the bacteriophage, the transfer of genes between bacteria by specialized transduction, the development of replica plating, and the discovery of the bacterial fertility factor F (F plasmid).

A child of the Great Depression, her lunch was often a piece of bread topped by the juice of a squeezed tomato. She attended Evander Childs High School in Bronx and graduating at the age of 16. In College, Esther Lederberg initially want to study French or literature, but she switched her field of study to biochemistry against the recommendation of her teachers, who felt women struggled to get a career in the sciences.

She received a bachelor’s degree in genetics in 1942 at the age of 20 in New York City’s Hunter College. After graduating from Hunter, Esther Lederberg went to work as a research assistant to Alexander Hollaender at the Carnegie Institution of Washington. Later she had published her first work in genetics. She entered a master’s program in genetics and later finished her master’s degree in 1946 at Stanford University. Esther Lederberg next went to the University of Wisconsin to pursue a doctorate degree. She completes her doctorate under the supervision of R. A. Brink, in 1950.

As Esther Lederberg got her PhD, she had made a lot of achievement to contribute to microbiology and genetics. She was the discovery of bacteriophage, a virus that infects E. Coli bacteria. Eventually devised the first successful implementation of replica plating with Joshua Lederberg, and helped discover and understand the genetic mechanisms of specialized transduction. This contributions laid the foundation for much of the genetics work done in the latter half of the twentieth century. In 1959, Esther Lederberg returned to Stanford. She remained at Stanford for the balance of her research career, founding and directing the Plasmid Reference Center (PRC) at the Stanford School of medicine from 1976 to 1986.

Even though, Esther Lederberg was a scientist, she had still faced with many significant challenges as she was a woman scientist in the 1950s and 1960s. In 1966 Lederberg was excluded from writing a chapter in the book of “Phage and the Origins of Molecular Biology”. According to the science historian Prina Abir-Am, her exclusion was “Incomprehensible” because of her important discoveries in bacteriophage genetics. Abir-Am attributed her exclusion in part to the sexism that prevailed during the 1960s. She has not been credited with as much of the credit as she really deserved.